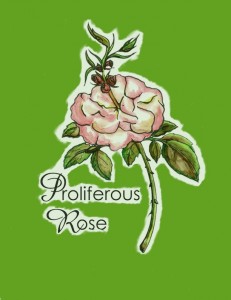 Proliferous Rose is the name of a one-man band I created in 2007. I was born in Little Rock, Arkansas, in 1943 and grew up musically during the transition from the big band era to the rock and roll period. My first active musical phase ran from about 1959 to 1963. Starting out in concert bands at school, I played baritone sax in the swing band at my high school and then a rock band called the Corvairs—a band much better than the car it was named after!—before switching to guitar and playing in a couple of other rock bands, The Fidels and The Counts, and a vocal group called The Graduates, mostly in clubs and at school dances in central Arkansas but also on local TV. The Fidels cut a couple of records, one of which rose to number three on local top fifty charts and the flip-side of which has recently—and mysteriously—resurfaced on the internet. In addition to playing sax and guitar, I sang lead for the Counts and backup baritone and bass in the two other rock bands and The Graduates.

Growing up in Arkansas meant that I listened to a lot of early rock and pop that now sounds very country—Elvis and “knockoffs” like the young Conway Twitty and Charlie Rich—less pure country of the Hank Williams kind. It couldn’t help but give me a sense of being close to the middle of things, since it allowed me to come into occasional contact with major players like Elvis’s Scotty (Moore) and Bill (Black), Conway Twitty’s drummer and songwriter Jack Nance (“It’s Only Make Believe”), and the Silver Fox himself, who grew up in Benton, a town about twenty miles south of Little Rock, and whose bass player at the time was the older brother of a member of The Graduates.

Growing up in the South also meant that I listened to a lot of black music, from Little Richard on to The El Dorados, Jerry Butler and the Impressions, and Little Anthony and the Imperials. I especially loved doo-wop, as represented by the black groups just mentioned as well as by white ones like Dion and the Belmonts, The Elegants, The Diamonds, and The Statues (who did the best version of “Blue Velvet” ever); I also enjoyed Southern gospel quartets such as Little Rock’s Melody Boys and even sang barber shop for a time—all because of the close four-part harmony with a high tenor and a deep bass. Due to my love for such harmony I have always been partial to later groups such as The Four Tops, The Temptations, The Beach Boys, CSN(Y), and The Eagles. These groups and their songs and styles may seem like ancient history to some people, but they and others as well as individual artists have surely found their way into my music in one way or the other and thus live on there willy-nilly as well, of course, as in their own right in recorded music, online, and, in some cases, even onstage.

I wrote my first song in 1959 and had written over a hundred by the time I went in the Navy in 1963. When I was discharged two years later, the British Invasion had begun, the whole music world seemed to have changed, and I had gotten married to a girl who found some aspects of the musical life less than appealing. So I went to college, for a long time, and had a career as a German teacher and professor that took me from a high school in Oregon to Eastern Washington University and finally to Purdue University in Indiana, where I remained for twenty-seven years. My career didn’t allow much leisure for music, but I didn’t abandon it altogether, either as a listener, a musician, or as a songwriter, though there were lengthy gaps in my contact with pop music as in my playing and writing.

In 2005, looking toward retirement, I started playing guitar and singing more often, began learning to play the bass guitar, picked up a sax for the first time in forty-four years, and discovered digital recording. Since then, and especially since retiring in June of 2010, I have spent much of my time revising older songs, writing new ones, and recording both as well as covers of a few favorites.

I still play the sweet 1960 model Gibson ES 300 I bought in 1961, now mainly as a rhythm guitar. Most recently, I have been playing lead on an early eighties Lotus, a Fender Stratocaster copy that sounds very bright and perky to my ear. My bass is a serviceable Epiphone Embassy Special IV. For a time, I rented Yamaha and King alto saxes and a Yamaha tenor but now own a Yamaha alto that will feature in future songs. I play drums in my head, but not in three-dimensional space. All the percussion on my recordings comes from loops provided by the programs I use, but I do modify them in almost all of my songs, often considerably.

A note on the name “Proliferous Rose”: A rose is “proliferous” when, as the image of the flower on this and other pages of the site shows, the center of the flower displays not the usual stamens and pistil, but rather a continuation of the stem, which bears additional blossoms. The German poet Goethe used this kind of flower to illustrate his ideas of permanence and evolution in nature. True, it results from a hormonal irregularity, but then poets—and musicians—are often, let’s say, “different,” too. I chose the name “Proliferous Rose” partly because of the beauty of the flower as illustrated in Goethe’s work and partly to suggest the fact that my music has developed over several decades and in several different ways, while maintaining certain basic features, such as a more lyrical approach to melody and an emphasis on close harmony.

Thanks for listening (and reading) and for any other kind of support!